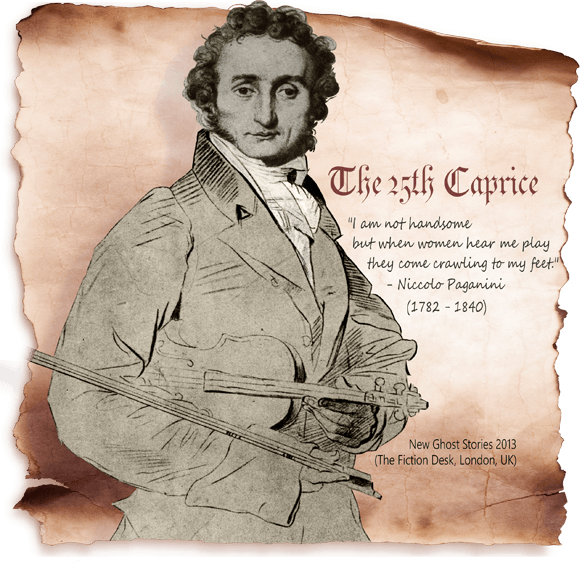 When Pesha was a child, his father guaranteed his musical future by striking a bargain with the ghost of Niccolò Paganini. Now, on the fiftieth anniversary of Pesha’s career as a celebrated violinist, he is obliged to play Paganini’s lost 25th caprice then cease playing forever – or suffer the enchanted consequences. On stage and off, the maestros battle for supremacy. When Pesha triumphs, it is not without significant compromise.

Are our artistic works made by our own hands or formed by another’s eyes and ears? Is any creative endeavour only ever as meaningful as an audience’s ability to interpret it? When all is said and done, who shapes a work? Audience or author? Could it be that only a genius can immunise a work against the whittlings of audience readings and watchings and listenings? And that only the work of a maestro – virtuoso, laureate, prodigy – could ever withstand distortion by the medium in which it appears? I want to believe genius stirs the soul in any context; I want to think that while we might not understand it, the stirrings genius raises inside us are a primal response to a master’s work. I’d like to think genius transcends time, the way Paganini’s genius did. No matter, the capacity of his audiences. That he would transcend again today. Irrespective of Facebook’s mash. I’d like to think that was possible.