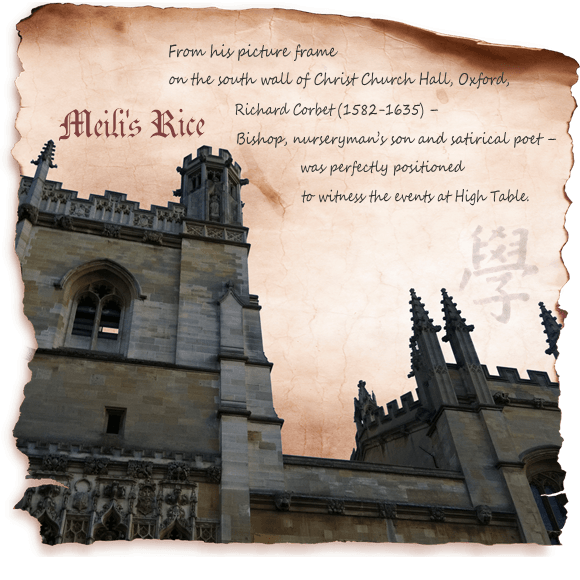 At a college dinner in Christ Church Hall, Oxford, Niall Harris – Australian author and a phobic public speaker – is a guest at High Table. When The Dean invites him to address the gathered undergraduates Niall stutters, mentions his muse, and sits. Aghast, Hiram Fletcher, Professor of Philosophy, proposes they adjourn elsewhere. Accompanied by Justin Gaisford, Professor of English, the men make their way to an exotic Chinese restaurant. Fine food and wine are discussed – as entrée to a sensitive issue which must be resolved.

Visiting Oxford in 2012 and 2013, I felt just as Niall did. The stupendous architecture and the rounded accents, the meticulous manners and just-so methods of Oxonians made me feel as though I had, like Alice, stepped into wonderland. My way of speaking, which other Aussies had told me sounded more English than Australian, was the subject of polite mirth. My unabashed delight in the stories seeping from landmarks like Christ Church Cathedral, the Radcliffe Camera and The Eagle and Child pub made for bemusement because they left me as wide-eyed as a child. I felt very Australian, which meant, I discovered, that I felt innocent. Fresh, I think. “It’s all so civilised,” I told an Englishman as we watched punts being pushed along the River Cherwell. I commented on their sedate progress, compared it to the way our surfboats smashed their way through the beach breaks of the Australian east coast. “Ah,” he said. “But we can demolish people very succinctly.” We looked at one another. “Oh,” I said. Yes, I was just like Niall.