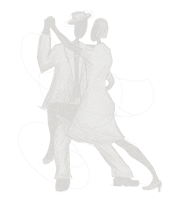 “How long have you been dancing?” I kept hearing the same question and I kept thinking, Why is everyone asking me that? I decided it must be to do with age. There must be something about being older, and a dancer, and a Rio Rhythmics Student Supporter that makes for a funny fit.
Then last week, something different. A follower asked, “Is there a question you get asked all the time?”
“Well, yes, as it happens,” I told her. “Everyone wants to know how long I’ve been dancing. I think it’s because I’m older.”
“Oh, bosh,” she said, delightfully.
And so I thought back to starting Lambada, Bolero, and Bossa Nova with Rio Rhythmics (a million dance-years ago) in 2003, and remembered how my dance-starter self would always (but always) ask everyone, “How long have you been dancing?”
...I asked the leaders who did such beautiful Cha-Cha.
...I asked the dance-gods who could name the dance style from the song’s first notes.
...And I asked Lambada-John, a Rio Rhythmics student famed for his moves.
“How long have you been dancing, John?”
“Three years,” he said, modestly.
Ohhhh, my starter dance-self thought. Guru.
I kept asking.
I wanted to cross PROPERLY into the dance world and I thought the answers I was getting might tell me WHEN that would happen.
...I learned to step into a bent leg in Merengue.
...I learned how to spin in Salsa (without falling over.)
...I discovered the basic dance step to most of the Forró rhythms is known as dois pra lá e dois pra cá, and I learned how to to pronounce it.
Thirteen years later...
The more you know, the more you’re equipped to know: and then the questions change. At some point I stopped asking, “How long have you been dancing?”
I DID ask a Brazilian dance instructor, “Do you dance Gafieira as well as you’d like?”
She told me, “My body is always changing. How I dance now is not how I’ll dance tomorrow. Not better or worse. Just different.”
To everyone who’s ever asked, “How long have you been dancing?” I’d now say, “Thirteen years.”
I’d say, “Not long enough,” and, "Dancing doesn’t have a finishing line,” and, “Every day brings a new lesson and a fresh perspective.”
I’d also say, “Age has nothing to do with it.”