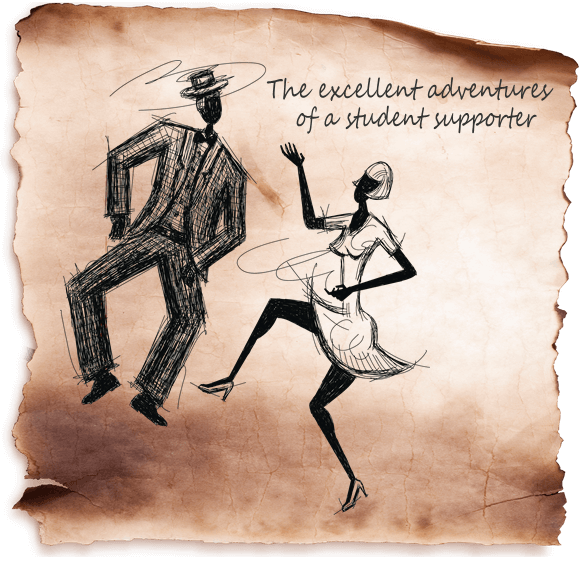 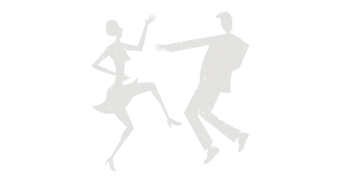 It’s the t-shirts. Rio Rhythmics’ Student Supporter tees are magic. Like the wardrobe-portal in the C.S Lewis novel (the one with the lion and the witch), Student Supporter tees open doors to secret places people would never go but for the fact they’re wearing  black shirts with “RIO RHYTHMICS STUDENT SUPPORT TEAM” on the back.
Student Supporters wearing SSP tees WITNESS things. Like... a class of Latin dance beginners standing in rows the first time an instructor shows them how to step into a bent leg. The beginners watch. They try. They THINK. And then they realise they aren’t stepping as instructed, at all. So they give themselves a shake. They focus on the finer points and their work wakes a kind of innocence. It brings them together. Student Supporters in Latin Dance Starter classes watch the process happen. It’s lovely.
When Student Supporters put on their SSP tees they get to TRY stuff. Like... suggesting to a nervous follower she might like to close her eyes during their merengue. Then saying quite softly (so’s not to frighten), “Listen to the music and my lead, don’t think of anything at all.” Saying it to the follower once. (Perhaps saying it twice.) The follower listens. She releases her tension. She trusts and responds. When the music stops she opens her eyes, delighted. She’s glimpsed what she can do. There’s no need to be nervous. It’s magic.
Wearing an SSP t-shirt brings on an infectious joy, and creates happy, spur-of-the-moment mischief. As a fifty-something follower, I once brought a paper flower on a fine, wire stem to class and presented it to a twenty-something salsa leader as an Order of Merit. He pushed the wire through his thick curls and wore it proudly for the rest of the lesson. Recently, a thirty-something leader dancing with a frangipani tucked behind his ear was chuffed when I complimented him on his style choice. “You can call me Frangi,” he said.
As a Student Supporter, I’ve romped through all kinds of adventures across all dance styles and they make magic stories. I’m looking forward to telling them. (I really do think it’s because of the t-shirts.)